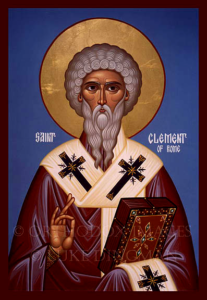 St. Clement of Rome (35 — 99 AD) was the 4th Pope of Rome, residing over the See from years 88 to 99 AD. Irenaeus testifies of this, saying, “In the third place from the apostles, Clement was allotted the bishopric.” Clement was ordained by St. Peter the Apostle.

By name, he is mentioned of by St. Paul the Apostle, in his letter to the Philippians, saying that Clement—along with others—is among those “whose names are in the book of life” (Philippians 4:3). Receiving the crown of Martyrdom, Clement is deemed a saint by the Orthodox Church. His feast day is on 29 Hathor.

Clement’s writings have been preserved by the Orthodox Church, and are declared canonical by the Ethopian Orthodox Tewahedo Church, as were also by early saints, such as St. Irenaeus of Lyons.

Writings of St. Clement of Rome:

• First Epistle of Clement to the Corinthians