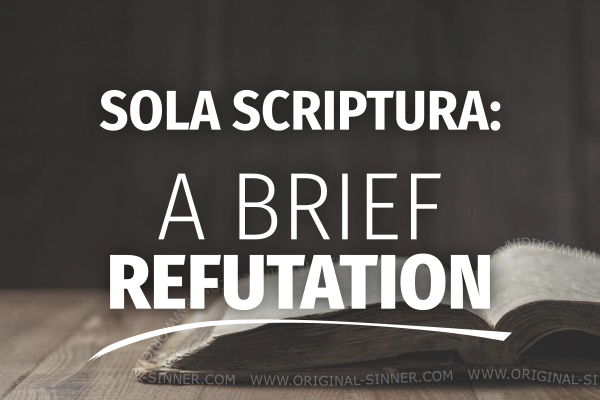 During the Protestant Reformation, Martin Luther (and later, John Calvin and the entire protestant movement) devised the doctrine of Sola Scriptura, which is Latin for “scripture alone.” Sola Scriptura has had varying definitions—depending on the individual Protestant—but at its root, the doctrine remains the same. Sola Scriptura proposes that the scriptures are the only source of infallible and authoritative doctrine, and that if a rule of faith (doctrine) is not taught in scripture, and cannot be proven by scripture alone, then that rule of faith is not binding upon Christians.

The most common passage that protestant apologists utilize—in an attempt to support Sola Scriptura—is 2 Timothy 3:16-17, where St. Paul writes that “All Scripture is given by inspiration of God, and is profitable for doctrine, for reproof, for correction, for instruction in righteousness, that the man of God may be complete, thoroughly equipped for every good work” (NKJV). First, we must recognize that, in order for verse 16 to be teaching Sola Scriptura, it would have to be written that only scripture is profitable for doctrine, and not merely that all scripture is profitable. As Oriental Orthodox Christians, we believe that the scriptures are profitable for these things, and that the Bible is “God-breathed” (θεόπνευστος) and therefore authoritative and binding on Christians. However, we do not accept that this is the only medium through which revelation has been given, and neither do we accept that all binding doctrines, teachings, and rules of faith come from the scriptures themselves, but rather that the oral tradition—passed down by the Apostles, through the Church—is on equal standing with the scriptures. They don’t contradict each other, but rather complement each other, and one cannot be properly understood and contextualized without the other.

Even granting that the verse is stating that the man of God will be made complete by use of the scriptures, the logic which the protestant applies to this would fall on its face and refute the position they’re asserting. The logic goes as follows: “If X makes you complete, then all you need is X, and X is sufficient in all respects.” Let’s apply this faulty logic to James 1:4, which reads: “But let patience have its perfect work, that you may be perfect and complete, lacking nothing” (NKJV). Given the application of this faulty logic, we could actually refute Sola Scriptura: “patience is completely sufficient in perfecting the man of God, and so we don’t actually need the scripture!” If all one needs is patience, then the scriptures could (in theory, given this reductio ad absurdum) be completely dismissed. Just because X makes one complete, it doesn’t necessarily follow that X, alone, is sufficient, given the Biblical context and usage of the word complete/adequate.

Some will point out that the words exartizo and artios—which are used in 2 Timothy 3:16-17, to mean “complete” or “sufficient”—are not utilized anywhere else in scripture, including in James 1:4, and that therefore the fundamental meaning changes between passages. This is to commit a basic error in reasoning. Just because the Greek word is different, it doesn’t mean that the words do not convey the same meaning or have the same definition. In fact, the Greek words used for perfect and complete are teleioi and holoklēroi, which are strong Greek terms (some would argue stronger than artios and exartizo, used in 2 Timothy) for “complete,” “sufficient,” or “perfect.” So Protestants’ attempts to utilize the Greek, to counter the reductio ad absurdum, also fails.

Another important thing to note is that this passage has been grossly taken out of its context, by proponents of Sola Scriptura, because if we read just two verses before, a new picture forms. If we read from verse 14 of 2 Timothy, it goes “But you must continue in the things which you have learned and been assured of, knowing from whom you have learned them, and that from childhood you have known the Holy Scriptures, which are able to make you wise for salvation through faith which is in Christ Jesus” (2 Timothy 3:14-15 NKJV). Notice how St. Paul commands Timothy to follow the things which have been passed down to him by those before him and the Holy Scriptures which he was acquainted with (which didn’t include all of the New Testament). So Timothy is commanded to follow the traditions of those who taught him (the apostles) as well as the scriptures, so when 2 Timothy is read in its context, the position of scripture alone is refuted, word-for-word. Timothy was commanded to follow the tradition and the scriptures, with verses 16 and 17 emphasizing that scripture is especially profitable for doctrines, for reproof, for correction, and for instruction in righteousness, not that it’s the only source of these things. Other, more-seasoned apologists, have gone in-depth into how Protestants misuse this verse, one of which is an article by Jimmy Akin, which I highly recommend reading for those who are interested in debating the issue at a deeper level.

Another issue, posed by accepting Sola Scriptura, is that the scripture recognizes an authoritative, extra-Biblical tradition—namely, the oral tradition—passed down by Christ to the apostles, and through the church down to our times.

There are several passages which identify the oral tradition and its authoritative status as the word of God, the most compelling being 1 Thessalonians 2:13, where St. Paul writes, “For this reason we also thank God without ceasing, for when you received the word of God which you heard from us, you welcomed it not as the word of men, but as it is in truth, the word of God, which also effectively works in you who believe” (NKJV). Notice how St Paul makes it clear that they received the teachings by word of mouth, not by reading the scripture. Now did Christians also read the scriptures? Sure, but we must remember that the canon wasn’t established at this point, and so the Christians didn’t have a table of contents by which they could use, to identify which books were scripture and which were not (exhaustively speaking). They had a general idea of the Old Testament, and some New Testament canonical books, but they mostly had to rely on the oral tradition/teachings passed onto them by the apostles—and the apostles themselves received these teachings, orally, from our Lord, and God, Jesus Christ.

The earliest Christians didn’t have scripture as their only authority for doctrines, so why should we? St. Paul explicitly teaches, in 2 Thessalonians 2:15, that we are to “…stand firm and hold to the traditions which you were taught, whether by word of mouth or by letter from us” (NASB). Many protestants will rush to defend the man-made doctrine of Sola Scriptura, by claiming that all of what was passed down orally by St. Paul was put into the Bible. But a fundamental issue arises: is that taught in scripture? If they say the Bible does teach it, then I’d challenge them to provide a verse that teaches that, and if they can’t, then it is not binding upon Christians to believe it, and we have good reason to believe that not everything Paul and the apostles taught is written down in the New Testament. Remember that Paul preached for hours on end, over a span of years, but his epistles are quite short, relative to the rest of the New Testament, so one could reasonably conclude that not every single thing that he taught was written down, and that he passed on many teachings purely by word-of-mouth and not by epistle, and that these teachings were preserved and passed down by his successors (this would hold true for the other Apostles as well).

Provided below are a few quotes from some of the most-renowned fathers of the Christian Church, who recognized the binding authority of the written tradition (the scriptures), the oral tradition, and the church itself in regards to rules of faith for Christians:

“…Just as there are many things which are observed by the whole Church, and therefore are fairly held to have been enjoined by the apostles, which yet are not mentioned in their writings.”

“Of the Dogmas and messages preserved in the Church, some we possess from written teaching and others we receive from the tradition of the apostles, handed on to us in mystery. In respect to piety, both are of the same force. No one will contradict any of these, no one, at any rate, who is even moderately versed in matters ecclesiastical. Indeed, were we to try to reject unwritten customs as having no great authority, we would unwittingly injure the gospel in its vitals…”

“It is needful also to make use of tradition, for not everything can be gotten from Sacred Scripture. The holy apostles handed down some things in scriptures, other things in tradition.”

“Hence it is manifest, that they did not deliver all things by Epistles, but many things also unwritten, and in like manner both the one and the other are worthy of credit. Therefore let us think the tradition of the Church also worthy of credit. It is a tradition, seek no farther.”

These aforementioned quotes are some of the many, from the church fathers who’ve wrote about this core pillar of Christianity, that the Church, the scriptures, and the oral (and apostolic) tradition have binding authority over Christians. If one wishes to further investigate the fathers of the Church and their beliefs, he will find that none of them held to the core pillar of Protestantism (Sola Scriptura).

Sola Scriptura collapses given its own criteria, which states that all authoritative and binding doctrines must be taught and found in scripture, because the doctrine of scripture alone is not taught anywhere in the Bible itself, rendering it self-refuting and unbiblical. The early church fathers and theologians who were successors of the apostles—some of whom actually knew the apostles personally, and were directly trained by them (see the Apostolic Fathers)—never taught that scripture is the sole source of binding rules of faith but, in fact, embraced the authority of the Church and the oral tradition, as well as the scriptures, rendering Sola Scriptura utterly foreign to Christian thought from a historical perspective.

As Orthodox Christians, we are happy to proclaim that we follow the traditions of God, which were given to the apostles, passed on to their successors, and preserved by the Church to this day, and not the traditions which have their origin in men, which Christ condemned. If you are a protestant, take a moment to challenge your presuppositions, and genuinely seek the truth regardless of what the truth would have to be in order to comport with those philosophical pre-commitments. As Christians, we should constantly be challenging our presuppositions, and if someone approaches the issue of Sola Scriptura from this mindset, they will find that it’s self-refuting, unbiblical, and alien to the history of the Christian church.